How Do Toronto Raptors Rank Among Most Rewarded NBA Fanbases?

You would have to look long and hard to find an NBA franchise more successful over the past decade-plus than the Toronto Raptors, under the direction of team president Masai Ujiri.

Going back to when he was hired by former president of Maple Leaf Sports and Entertainment CEO Tim Leiweke in May 2013, the Ujiri move was one of the great turning points in Toronto sports and Ontario sports betting overall.

There were multiple playoff seasons under the on-court leadership of DeMar DeRozan and Kyle Lowry.

There was the “trade” during the summer of 2018 that brought Kawhi Leonard north of the border followed by an NBA championship the following spring, the greatest moment in Toronto sports since the Joe Carter home run gave the Blue Jays their second World Series in 1993.

After a disappointing COVID season in which the team played in Tampa, the Raptors earned the fifth seed in the Eastern Conference and are a strong pick by many across Ontario sports betting apps to finish around there again this season.

Ujiri’s selection in the 2021 NBA draft of Scottie Barnes, who last year won rookie-of-the-year honors, looks like a master stroke. The team has kept together a strong core on multi-year contracts, led by Fred VanVleet and Pascal Siakam (products of an impressive developmental system), and were front and center in the off-season rumors to land superstar Kevin Durant.

So it comes as absolutely no surprise, then, that the Raptors rank high among the most rewarded NBA fanbases, according to our ranking system. 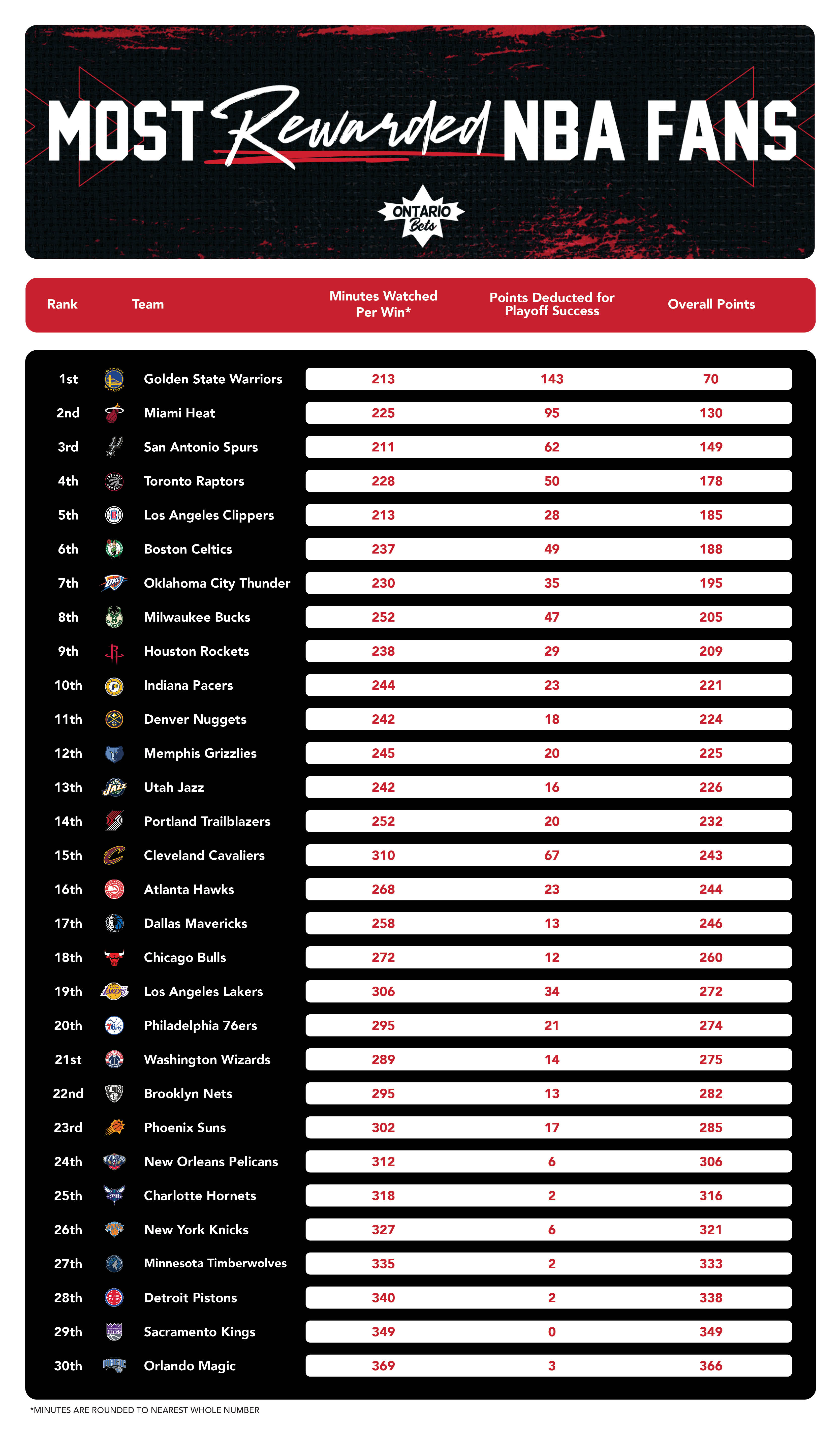 Raptors Among NBA's Most Dedicated Fanbases

Ontario Bets developed the system of all 30 NBA teams covering the past 11 seasons.

The first category - “Minutes Spent Per Win” - was determined by taking the amount of regular season games played by each team (from 2011-12 season to 2021-22 season) multiplied by the average length of an NBA televised game (2 hours, 13 minutes).

The second category - “Points Deducted for Playoff Success” - was utilized to decipher the value of seeing playoff success during those 10 seasons gathered in the first category. The point values were 1 point per playoff berth, 3 points per playoff series win, 3 points per NBA Finals appearance, 15 extra points for NBA Championship win.

After adding all the points together for every postseason from 2011-12 season to 2021-22 season, the points were deducted from Category 1 to arrive on the final points and rankings.

The Raptors came in at fourth overall: 228 minutes, minus 50 points for playoff success, for 178 overall points.

Last on the list was the Orlando Magic, at 366 points.

Mark Keast has recently covered the sports betting industry in Canada for The Parleh, and is a long-time sportswriter and editor, most notably with the Toronto Sun.