How Do Canadians Stack Up Amid Most Dedicated NHL Fans? 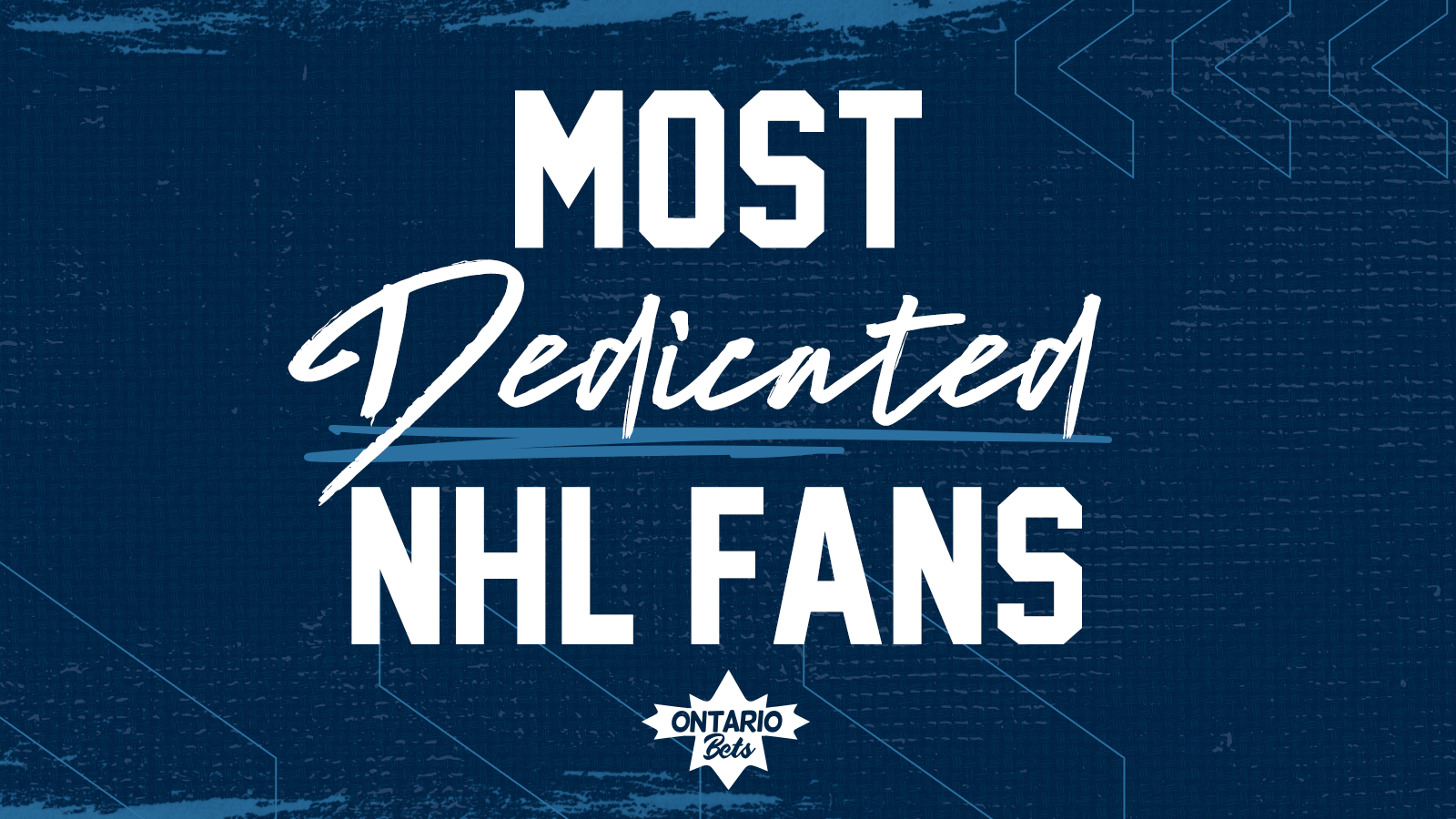 The NHL regular season gets underway in early October, with most teams starting play by the 13th of the month at the latest. Canadian hockey fans and Ontario sportsbooks have been waiting eagerly for the season to resume ever since the Colorado Avalanche skated off the ice with the Stanley Cup on June 26.

While last year was a full 82 game schedule for all clubs, this season finally feels like the return to a normal season with less COVID restrictions, less player testing and less likelihood for games to be rescheduled.

And of course, a full season with full capacity available in all of the Canadian NHL arenas. Remember, OntarioBets is your home for everything related to hockey betting in Ontario.

But which team has the most dedicated fans? Perhaps more importantly to Canadian teams, which one of the seven Canadian clubs has the best fans? OntarioBets.com developed a matrix system to rank the 31 NHL Teams (omitting Seattle due to a limited sample with it only being in the league for one year) based on the dedication of their fans.

The two categories used were ‘Game Day Commitment,’ a weighted grouping of capacity percentage by wins since the 2010 season (eliminating the two shortened COVID seasons) and the amount of ticket searches in the state or province of that team.

The second category is ‘Fan Engagement,’ a weighted grouping of social following growth over the past five years and engagement with each club’s social media channels, including Facebook, Instagram, Twitter, TikTok and YouTube. These numbers were gathered via SocialBlade.com.

NHL teams were ranked from first to last in each category and given points based on their ranking. First place received 31 points per category, second received 30, third received 29 and so on until the 31st ranked team received only one point per category. 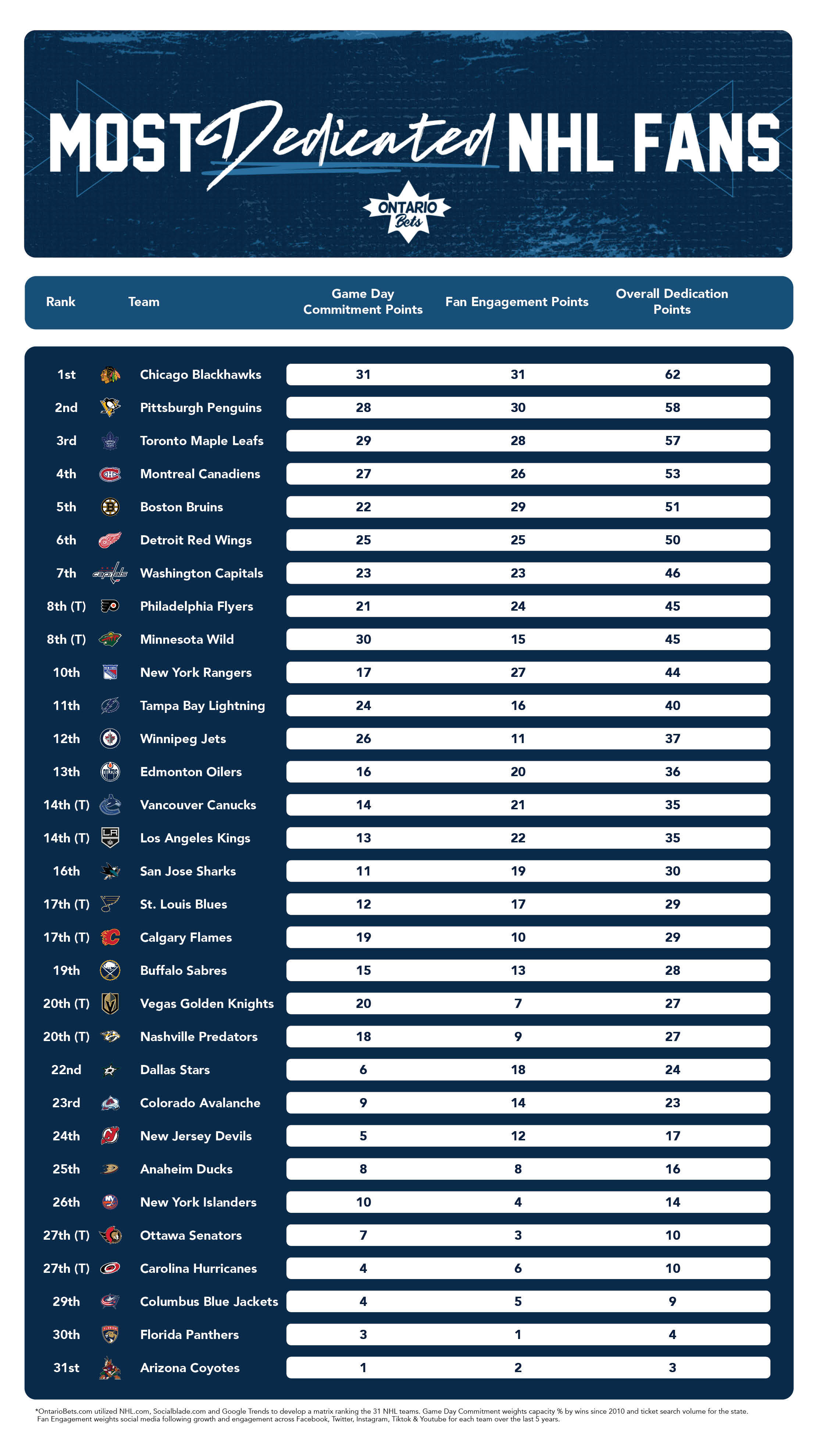 To the surprise of no one, the top two Canadian teams were the Toronto Maple Leafs and the Montreal Canadiens, coming in third and fourth place respectively.

Toronto and Montreal are two storied franchises with a ton of history and a ton of loyal fans. The presence of Auston Matthews, one of the most recognizable faces in hockey on the Toronto roster, surely played a role in them surpassing Montreal and becoming the top ranked Canadian team for fan dedication.

Matthews won the Hart, Richard and Lindsay trophies this past NHL season and spearheads a solid attack for the Leafs, who project to be one of the top teams in the league this upcoming year. Over at BetMGM Ontario, Matthews is +450 to repeat as MVP this season.

Montreal doesn’t have a marketable superstar on Matthews’ level and project to be one of the league’s worst teams for a second consecutive season, but they did make a run to the Stanley Cup finals a couple of seasons ago, including a first round playoff victory over Toronto in 2021. The loyalty and dedication of their fans has been put to the test since, but they continue to be among the best in the league.

At DraftKings Ontario, the Canadiens are +20000 to win the Atlantic Division.

The only two teams to rank ahead of Toronto and Montreal were the Pittsburgh Penguins and Chicago Blackhawks. Both of those franchises won multiple Stanley Cups during the time period that was considered and both have been led by more than one extremely marketable player on star-studded rosters.

Stay close to OntarioBets for the most up to date Stanley Cup odds.

Best of the Rest

The Western Conference teams were next on the list of Canadian franchises, with the Winnipeg Jets ranked 12th, the Edmonton Oilers 13th, the Vancouver Canucks 14th and the Calgary Flames 17th.

The Ottawa Senators bring up the rear for Canada at 27th in the league, as they have had a tumultuous decade of off-ice drama surrounding ownership, the arena and players leaving town. Thankfully for Senators fans, the team seems to be turning a corner and there is optimism both on and off the ice heading into the 2022-23 season.

Canada has always been known for their love of hockey, so it was no surprise to see both Toronto and Montreal rank near the top of the list for most dedicated fans.

With reason for optimism in several other Canadian cities, teams like Edmonton, Calgary and Ottawa should also see their ranking climb in the coming years.

Remember, OntarioBets is your home for the top betting apps in Ontario.